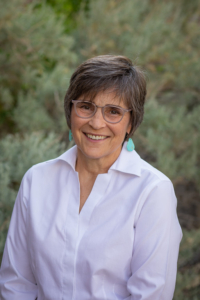 Kelly Jensen’s career spans more than three decades of leadership experience across the nonprofit and local government sectors. Her expertise includes directing and overseeing fundraising initiatives; building and managing relationships with donors, Trustees, elected officials, and stakeholders; and excelling in operations including budgeting and strategic planning.

Immediately prior to Compass, Kelly worked to institute fundraising best practices and develop a culture of philanthropy at the state level as Director of Philanthropy for Planned Parenthood of Montana. Kelly’s resume also includes Director of Development for the Buffalo Bill Center of the West where she led all fundraising activities – including the launch (and surpassed projections) of a $50 million campaign. Prior to this role, Kelly served as Associate Director of Philanthropy for the Wyoming Chapter of The Nature Conservancy, managing cultivation and stewardship efforts for donors and constituents nationwide. Kelly further honed her problem-solving and operational management skills as an elected Park County Clerk for Park County, Wyoming, and more than a decade as the Administrative Services Director for the City of Cody, Wyoming.

Kelly’s dedication to her communities extends into her volunteer leadership, including serving as a Board and committee member for several nonprofits, a gubernatorial appointee on the Wyoming Commission on Judicial Conduct and Ethics, and a founding committee member of the Park County Leadership Institute.

Excluding a one-year stint in Massachusetts, Kelly has always lived and worked west of the Mississippi. She earned a Master of Public Administration degree from the University of Wyoming and a bachelor’s degree in business administration and economics from Rocky Mountain College.